Breed of the Month 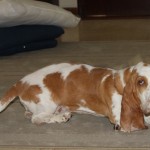 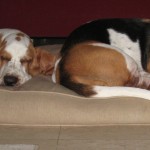 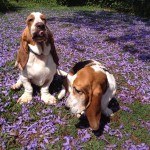 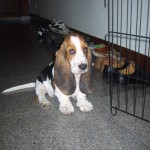 This month we look at a breed of dog whose sense of smell is second only to that of a Bloodhound. A breed who was originally used to hunt small game like rabbit and hare. A breed who is commonly used in Pop Culture with them featuring in TV shows such as Columbo, Dukes of Hazard, cartoon strips and even a brand logo/ambassador for a brand of shoes. Can you work it out? That’s right, this month we profile the lovable Basset Hound.

Mummified remains of short legged dogs were found in the Dog Catacombs of Egypt. Scent Hounds similar to Bassets were commonly used for hunting by both the Ancient Romans and the Ancient Greeks. Basset type dogs originated in France and were descended from 6th Century Hounds belonging to St Hubert of Belgium. The first mention of Basset dogs appeared in La Venerie, an illustrated hunting text, in 1585. Bassets achieved public and cultural popularity in 1853 when bronze sculptures of Emperor Napoleon III’s Bassets were displayed at the Paris Salon.

Bassets have an average life expectancy of around 11-12 years. Males have an average height of 30-38cm and weigh between 25-34kg and females average between 28-36cm and 20-29kg. While they are almost instantly recognisable breed, they are not a common one. We are lucky to have two VERY cheeky Bassets whose parents were more than happy to tell you a bit more about them!

Did you research breeds? Yes, online and in books

What made you choose Bassets? We wanted a medium sized dog that was cheerful, playful, outgoing and was happy to be active outside yet equally comfortable to chill inside.

Breeder? Pet Shop? Rescue? Daisy is from a pet shop and Boris came from a breeder.

Best thing about Bassets? They are affectionate, inquisitive, they act like clowns and they have a mind of their own.

Worst thing about Bassets? They shed a lot of hair and they drool a lot. They can also be high maintenance in terms of care and health, (Bassets are prone to ear conditions, eye conditions, skin conditions and back injuries due to their long bodies and short legs), and they have a mind of their own!

Something people may not know about Bassets? They are faster, more active and joyful than first impression. And only a Bloodhound has a better sense of smell.

Who would you recommend Bassets to? Anyone who doesn’t mind a messy house and has a lot of time for cuddles.

Memorable Moment: Occasionally being woken up by a fog horn, AKA a sleep talking Basset! Finding drool in places you wouldn’t think drool could be.
(I actually have my own memorable moment of Boris and Daisy. Daisy hurt her back and was spending her days with us for some much needed cage rest. When she was being dropped off in the morning, Boris, like all good brothers, would come for moral support. It was usually just a quick handover and Boris often stayed in the car park. But if he didn’t get a liver treat for being a supportive brother, he would howl! He learnt pretty quickly where the treat container and how best to get one!)

Gordon Vet Hospital
4.8
Based on 112 reviews