Whilst many of us will take a paracetamol tablet, or have a cup of coffee without hesitation, these seemingly innocuous agents can be highly toxic when consumed by a dog or cat. Last week, Winnie’s owner arrived home and noticed the box of paracetamol + caffeine tablets sitting chewed up in Winnie the Shih Tzu’s bed. She was straight on the phone to us, and brought Winnie in immediately.

As unpleasant as it is, Winnie was given medication to make her vomit,  to hopefully clear as much of the paracetamol and caffeine out. Unfortunately, both these compounds are absorbed rapidly, so we were concerned that in no way was she out of danger. Once the vomiting stopped, Winnie was then syringe fed a mixture of charcoal and sorbitol. As you can probably imagine, trying to syringe black liquid into a dog’s mouth just after she has finished vomiting could potentially be a messy process, however Winie took it all in her stride. Now we weren’t giving her a sweet drink to wash the vomit taste out! The charcoal acts to bind toxins in the intestines and the sorbitol acts as a cathartic and laxative, to keep it all moving through and out the other end quickly. Intravenous fluids and a night in hospital completed the treatment to try to flush the toxins out.

Dogs are quite sensitive to the effects of both caffeine and paracetamol, and with their small size, it takes a relatively small amount of these substances to make them very ill. And who can say off the top of their head, just how many paracetamol tablets are left in their current pack? 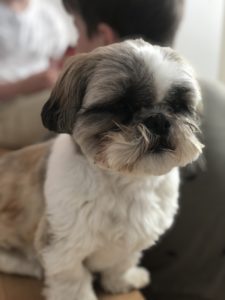 The pathways used by dogs and cats to metabolise paracetamol are exhausted quickly in the face of an overdose, which leads to both liver damage and damage to red blood cells.

Caffeine as we know is a stimulant. In pets, because of the comparatively higher dose, they are at risk of developing a rapid heart rate, heart arrhythmias, tremors and seizures.

The beautiful Winnie was a lovely little patient, and coped well with all of her treatment. She was very well behaved for her blood tests, and whilst there was some evidence of mild liver damage, it improved during her stay, so she was sent home to recover fully. Senior Pets: What To Do As My Pet Gets Older

September is Senior Health Month! As dogs and cats age they require more care and attention from their owner. Cats and small dogs are considered geriatric (senior) from the age of […]

Gordon Vet Hospital
4.8
Based on 112 reviews