Gordon Vet > Dog Care > Tyrone, the toughest of them all!

Tyrone, the toughest of them all! 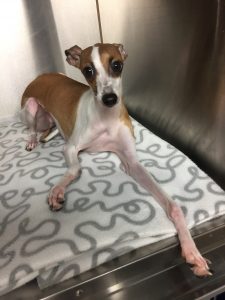 Tyrone the 10 month old Italian greyhound arrived at Gordon Vet one night with a very frantic owner. Little Tyron had managed to lock himself in the bathroom at home and became panicked, slipped over and broke his little leg!

His quick thinking owner bundled Tyrone up and bought him straight into Gordon Vet to see Dr David Loneragan. Tyrone seemed blissfully unaware that anything had had happened at all as he was still his excited little self, but none the less, he was given some pain relief and sedation and was x-rayed so the damage could be assessed. 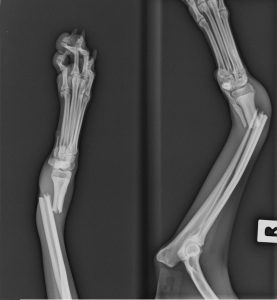 The x-rays showed a fractured distal radius & ulna. This kind of fracture requires specialist surgery, so after a splint was applied to his leg to prevent further damage, Tyrone’s family transferred him to NEVS in terry hills for surgery the next day.

One week later Tyrone came back to Gordon Vet for his re-check and was his usual excited, bouncy self, dragging around a very big cast on his leg! The cast was removed and a light bandage applied. With everything looking as it should and Tyrone was sent on his way for a little more cage rest before the stiches were able to be taken out.

Tyrone and his family visited us again for one more check, and he is almost as good as new! He gifted us with some amazing chocolates (not pictured as they didn’t last long enough to have one taken!) and given the all clear, with 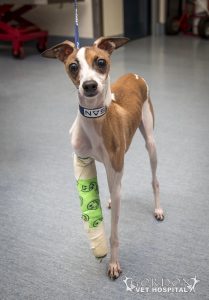 only one more check-up to go! Well done to Tyrone’s dedicated family for keeping him quiet while he healed. We are sure that it was not an easy task for such a young, happy puppy! We look forward to seeing Tyrone again, but hopefully not for a long time!

Italian Greyhounds are the smallest of the sighthounds (group of dogs bred to hunt by sight and give chase). They can be seen depicted in paintings from centuries ago, where they often sit with their noble owners. It is thought that they were originally bred to hunt small game and be companions to the wealthy.