Phin is an uncommon name for a really unique dog!

He is the kind of dog who catches everyone’s eye as he walks past. Not only does Phin have incredible  good looks, but he has the sweetest temperament to match. Examining him in the vet hospital is purely hindered by  the cuddles and kisses that he calmly tries to give, and to be honest we rather enjoy it!

A couple of weeks ago, he was sitting in the waiting room (and might I add occupying a good portion of it), with the owner of the kennel where he was staying. His owners had gone away for a few days and sure enough, Phin had developed a large swelling on the side of his face. There was no history of a fight or trauma, so it was a mystery as to how this had occurred. As you can see – Phin’s swelling was very noticeable.

We were worried about the possibility of a tooth root abscess or a foreign body such as a grass seed, and Phin certainly needed more investigation.

The owner of the kennel left Phin with us, and kindly agreed to come back later in the day to collect him.  Likewise, Phin’s devoted owner gave us the go ahead to do whatever was needed.

In no time at all, Phin was anaesthetised and we had taken radiographs of his skull and teeth.  Thankfully these were all clear, so we started the needle-in-a-haystack search for a foreign body. After opening up the abscess and much flushing of the wound, no foreign body revealed itself. Slightly disappointed, we placed a drainage tube in the wound and stitched it up. 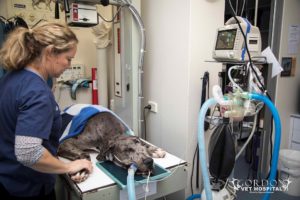 Phin undergoing X-rays of his nose and skull

A few days later we were pleased to see Phin again, with the abscess much reduced in size, and a week later it had resolved. Now this 7 month old boy can focus his energies on growing again, with his good looks restored!