6 months ago Mishka was a very sick kitty. She spent nearly a week at Gordon Vet, using up at least two of her nine lives battling both a serious kidney infection called pyelonephritis, which put her into kidney failure, and well as pancreatitis.  Mishka was placed on a drip, and given intravenous antibiotics to treat the kidney infection. Additionally, she was given an intravenous infusion of painkillers to keep her comfortable. Being so ill, little Mishka lost her appetite, so she also needed appetite stimulants in addition to plenty of encouragement, brushing, warmed up food, and all our little tricks to get her eating. Unfortunately, it was hard going, and despite improvements in her blood levels, she wasn’t recovering as well as we had hoped. After a week in hospital she was discharged on medication to help her kidneys function better, plus appetite stimulants and a big dose of TLC at home. Her family and all of us at Gordon Vet  were very concerned about whether she was going to pull through.

6 months down the track and Mishka’s family and all of us at Gordon Vet couldn’t be happier! This little lady is eating well, has gained weight, has the most beautiful shiny coat, and her blood levels are all back to normal! There were times when we really didn’t think that we would make it to this point. It was very much a team effort, and the whole team is so very happy! 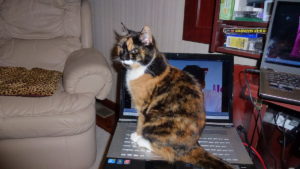 Mishka before she got unwell. 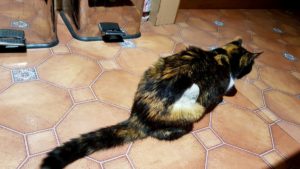 Mishka has been clipped for an abdominal ultrasound in this image