It’s a question that is asked every time a patient is admitted for a general anaesthetic or surgery. “Would you like us to run a preanaesthetic blood test?”
And we were very lucky that Maxine the 6 month old bright and bouncy labrador’s owners said yes. She had come from a breeder and was very well loved and cared for at home, showing no signs of illness. However, when she came in to be desexed at 6 months of age, we ran a preanaesthetic blood screen. This simply involved collecting a small sample of blood from her and running the test in our in-house lab. This blood test checked her liver, kidney function, protein level and her blood glucose level. 7 minutes later we had the result and there were a number of changes on her blood test. 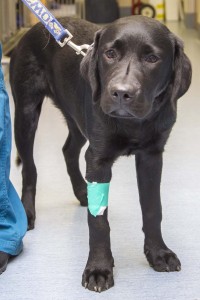 Maxine after her blood test

Most significantly, one of her kidney toxins was elevated. As a result of this, a decision was made to delay her anaesthetic and surgery, and investigate further, to ensure that Maxine receives the most appropriate treatment possible. We have found no further abnormalities, and will be seeing her again soon to repeat her blood test and hopefully get her surgery done and dusted.

Gordon Vet Hospital
4.8
Based on 101 reviews