Gordon Vet > Blog > A zebra, not a horse

A zebra, not a horse Removal of skin lumps is one of the more common surgical procedures done here at Gordon Vet, though as they say “When you hear hoofbeats, think of horses and not zebras”. So, when Rex the 5 year old Jack Russell X staffy came in with a lump on his skin, Dr Catherine took a fine needle aspirate biopsy to find out what type of mass it was. Under the microscope she saw round cells plus a scattering of an inflammatory cell called an eosinophil, which is commonly associated with a skin tumour called a mast cell tumour. When we take a blood sample, we can also see an increase in the eosinophil count when the patient has a parasite infection such as intestinal worms.

Mast cell tumours are a common skin tumour, and are particularly common in Staffies and Jack Russells. They can range from low to very high malignancy, and are certainly a skin tumour that we take very seriously and do a wide surgical excision for.  Accordingly, Rex returned to have the lump surgically removed, and the tissue was then sent to the pathologist for assessment. 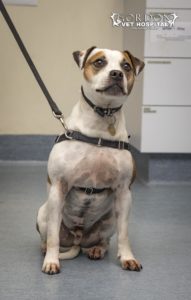 I’m not sure who was more surprised, the pathologist, vet or Rex’s family, when the pathology results came back. It was a case of a zebra and not a horse! There was no mast cell tumour, but instead, surrounded by inflammatory cells including eosinophils was a segment of a worm! Nobody knows for sure how it got there, however the most likely explanation is that this worm had a little misadventure, travelling out of Rex’s gastrointestinal tract, getting lost  and ending up under the skin, where Rex’s body recognised the worm as foreign material and walled it off with inflammatory cells. The good news is that Rex has fully recovered and he now has a fancy story behind the scar on his side.

While the world battles and adapts to COVID-19 it is important to spare a thought for a devastating puppy virus. Parvovirus is an often fatal disease that affects young puppies. […]

While the world battles and adapts to COVID-19 it is important to spare a thought for a devastating puppy virus. Parvovirus is an often fatal disease that affects young puppies. […]