Pepsi is a beautiful 4 month old Great Dane who had diarrhoea a few weeks before she came into Gordon Vets. Her owners noticed something wrong and brought her up to see Dr David. She was vomiting up all her food and had a reduce appetite (highly abnormal for a Great Dane puppy!).

When Dr David performed a palpation of Pepsi’s abdomen he noticed she had a thicker than normal loop of bowel which was very painful when palpated. This symptoms raises a lot of concerns for a foreign body (foreign, undigestable material within the intestine) or an intussesception (a section of bowel that telescopes into another creating a blockage – see image below). Pepsi was scheduled to have an ultrasound later that day. 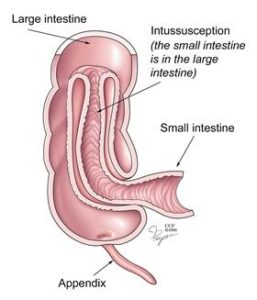 During ultrasound Dr David noticed that there was a significant intussusception in the area he palpated during examination and Pepsi was taken straight to surgery. During surgery it was found that the ileum (a section of small intestine) had become entrapped inside the colon and was reduced by simply pulling that section out. Once removed no further treatment was required and Pepsi made a full recovery! Interestingly the diarrhoea 2 weeks earlier may have played a part in this case as enteritis (intestinal inflammation) can be a causative factor of intussusception.

While the below video is not for the faint of heart this is a look at how we corrected the intussusception during surgery (CAUTION – GRAPHIC CONTENT):

Just as with people who are di […]

Just as with people who are di […]