Gordon Vet > Blog > It’s all in a Saturday morning

It’s all in a Saturday morning

Last Saturday morning, the waiting room at Gordon Vet was buzzing at 7:30am. Sitting near the door was a young Labrador, happy to see everyone, looking as though nothing was wrong. His owner however had astutely noticed that there was a large piece of bone stuck in his mouth, and was patiently waiting to have it removed. In the corner sat Spencer, a young ginger cat whose owner had noticed him trying to pass urine that morning but with no success. Across the room sat a forlorn looking cavoodle puppy who just couldn’t stop vomiting.
All three pets were fortunate that their owners were up at the crack of dawn and attending to their needs, in particular young Spencer. 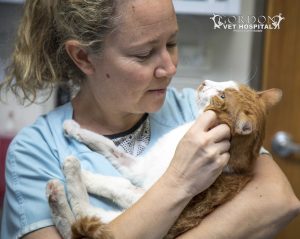 There is a condition that male cats are prone to, in which they acutely become unable to pass urine. Consequently their bladder fills and fills and fills and you probably get the very uncomfortable picture. Spencer’s bladder felt just like an orange sitting inside his abdomen.

We immediately gave Spencer pain relief, and ran a blood test to check his electrolyte levels. When cats are unable to excrete potassium in their urine, the level builds up in their bloodstream, and this leads to a slow heart rate and heart arrhythmias. Commonly, this is accompanied by the build up of other waste products too. These are serious considerations for a patient who needs a general anaesthetic to relieve the obstruction. Fortunately for Spencer, his owner noticed the problem and brought him straight in, and he had no electrolyte abnormalities or toxin build up.
Spencer’s general anaesthetic was smooth, and a urinary catheter was passed to relieve the obstruction. We all felt immensely relieved, I must say!
Spencer had a condition called feline idiopathic cystitis, which stimulated his urethra to spasm and effectively clench shut. His own body was working against him, obstructing him from being able to pass urine. After spending most of the week in hospital, Spencer is now at home, taking a couple of different medications to relax the two types of muscle that he needs to relax, in order to urinate. Who would have thought doing a wee was so complicated?

We all know there have been so […]

We all know there have been so […]