Captain Jack Sparrow, the very dashing 7 year old cat is well known for his ability to open cupboards, fit into small spaces and hide. Trickster by name and by nature! Unfortunately, this mischievous skill of his almost cost Jack his life. Jack Sparrow was found in a drain 9 weeks after escaping from his owner’s apartment. Before the escape, Jack weighed 8kg and lived a very luxurious life, lounging in front of the TV and often got caught red handed eating his owner’s prawns and avocados. Jack’s owner, devastated by his emaciated condition, brought him straight to Gordon Vet. On presentation, Jack was skin and bones, weighing 3.9kg (he had lost more than half of his body weight!). He was covered in fleas, very jaundiced, had head tremours and was unable to stand. 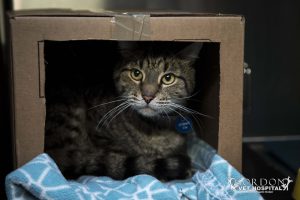 Jack loves hiding in all spaces great and small!

After performing blood tests and an abdominal ultrasound, Jack was diagnosed with Hepatic Lipidosis, or “fatty liver”. This condition is caused by starvation and is one of the most common causes of liver failure in cats. Normally, in starvation, fat is moved from the body’s storage depots to the liver for processing into lipoproteins. In cats, whose physiology is geared towards a completely carnivorous diet, their liver struggles to handle large amounts of mobilized fat. Hence, their liver becomes infiltrated with fat and fails. 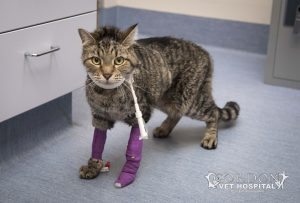 Jack was hospitalised at Gordon Vet Hospital for 3 weeks so became a much loved Clinic Pirate! 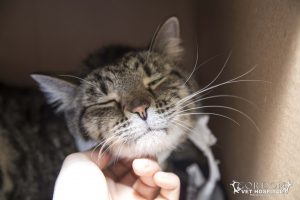 Jack loved cuddles and was the purfect patient!

Treatment for Hepatic Lipidosis involves aggressive nutritional support. A high protein diet must get into the cat to reverse the metabolic starvation state. Unfortunately Jack was so sick that he had no appetite. In order to give Jack a chance of survival we placed an oesophageal feeding tube, which exited the side of his neck. After 3 weeks of tube feeding, physio to build muscle strength and fluid therapy, Jack had regained his strength. Jack is now back home and back to his old antics. Well done Captain Jack Sparrow! 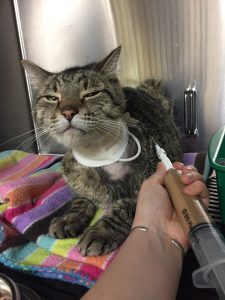 While it may not look like normal eating, this is how Captain Jack Sparrow got his meals – 6 times a day, lucky boy! 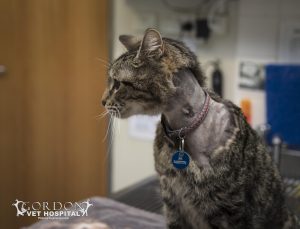 Jack made a full recovery and the site of his oesophagostomy tube healed normally. He has already gained around 1kg!

Imogene joined Gordon Vet in January 2018. She graduated from the University of Sydney with first class honours and spent her first few years working in a vet practice in Sydney’s inner west. Imogene is passionate about all aspects of veterinary medicine and has a special interest in small animal surgery. She knew she wanted to be a Vet from a young age, growing up on Sydney’s lower north shore with a menagerie of animals.