Gordon Vet > Blog > Animal myths – how many did you fall for?

Animal myths – how many did you fall for?

Can dogs and cats only see in black and white? Have you ever heard the expression,’blind as a bat’? Are bats really blind? As for goldfish, do they really have a 3 second memory span? Continue reading to find out the answers to these animal myths and more.

1. Dogs can only see in black and white 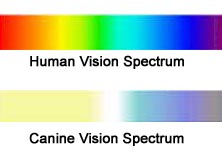 No, dogs and cats can see in colour too. Whereas humans have three colour detecting cone cell types in our retina (red, blue, and yellow), dogs and cats only have two (blue and yellow). Hence, dogs and cats see objects in shades of blue and yellow. While their long distance vision isn’t as good as ours, where their vision excels is in the detection of moving objects and of course night vision.

2. Bats are blind
Being ‘blind as a bat’ may not be so bad after all! It is well known that bats use echolocation in the dark of night, however bats also have two types of colour-detecting cone cells in their retina, similar to other mammals such as dogs and cats. Bat retinas have an abundance of rods, used for low light vision, and in fact their vision in low light conditions such as dawn and dusk may well be better than humans! 3. Goldfish have a 3 second memory
Well, this one has been well and truly debunked! In fact, despite the fish brain being 380,000 times smaller than that of a newborn human baby, their memory has been shown to last in excess of a year. So, make their tank interesting, change where you place items and make their life more fun!

4. Camels store water in their humps
No, camels don’t store water in their humps, rather their hump is a fat reserve. The fat, which is an insulator, is stored in the one spot to minimize the effect of its heat retention. When needed, this fat is converted into energy and water. Camels are just very efficient at using the water that they drink, and can drink as much as 100L at a time. Their bodies are highly adapted to cope in a dry environment. For instance, their nostrils are designed to trap the water vapour in their breath as they exhale. They are able to produce very thick urine and dry faeces to minimize water loss. Additionally, their red blood cells are ovoid shaped so that they can flow through the blood vessels even when the blood is thick. Camels can safely lose up to 40% of their bodyweight in water!